You are here: Home » Legal Issues » The Legal Expansion of US Industrial Hemp 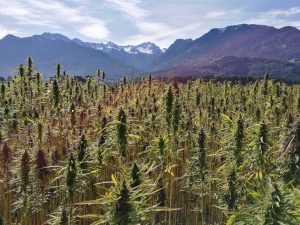 Let it be known that the cultivation of industrial hemp, a non-psychoactive variety of cannabis, is now possible for every state of these United States. This, with the passing of the Unified 2018 Farm Bill, December 2018, championed by Senate Majority Leader Mitch McConnell (R-Ky.). The Bill is said to have been signed with a pen made from hemp.

The summary for Title X – Horticulture under, “Other Provisions” reads:

“Hemp Production: Amends the Agricultural Marketing Act of 1946 [1] to allow states and Indian tribes to regulate or follow a plan established by the Secretary to regulate hemp production that includes locations of hemp production, sample testing for THC concentration, sample inspections of producers, and disposal of plants that are out of compliance.”

The welcome news regarding industrial hemp laws does, however, come at the price of heavy regulation.

According to section 10113 of the 2018 Farm Bill, an interested state’s plan for industrial hemp cultivation must first be run by their governor and top law enforcement official. Once the plan has buy-in from these top officials, it then must be submitted for further approval from the federal Secretary of USDA. In states that do not pro-actively submit a plan to license and regulate hemp cultivation, the USDA will create the plan for them via a regulatory program by which any future plans for industrial hemp must comply.

Section 12619 of the 2018 Farm Bill finally removes hemp derived products from federal classification as  Schedule 1 drugs. But technically, since cannabidiol (CBD) is a chemical compound of the cannabis plant, it remains illegal under federal law.

The good news is that the legality of shipping CBD and hemp derived products throughout the US (i.e. interstate commerce) is now A-OK; whereas it had been murky at best due previously to its Schedule 1 status. As long as a hemp product, per federal law, contains .3% of THC or less, interstate commerce is now entirely legal.

Hemp, no longer lumped-in with its historically evil twin, marijuana, has been vindicated. Hemp farmers will be treated like any other farmer. Additionally, new supply chains for CBD can begin from plants grown in the US instead of how so much of the hemp sourced for CBD oils has been coming from Europe, and unwittingly also from China.

The economic viability of hemp has long been understood in the USA. Both George Washington and Thomas Jefferson grew hemp on their land. It has been and continues to be used for fabric, paper, food, building materials, and of course, medicine, with some more recent uses as bio fuel and health and wellness products.

“In 1942 patriotic farmers, at the government’s requests, planted 36,000 acres of seed hemp.” This quote is from a 15 minute video called, Hemp for Victory, below.

I believe this latest government action takes us ever closer to the inevitable, full federal legalization. We appear headed in that direction.

One Response to “The Legal Expansion of US Industrial Hemp”