You are here: Home » Cancer » Cannabis: First-Line Not Last-Resort Medicine 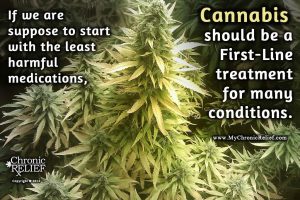 Who knew? In in my article, Cannabis Kills Cancer Cells, I laid out the scientific evidence provided by in-vitro and lab animal testing. The fact of cannabis’ proven ability to kill cancer cells still only barely scratches the surface in terms of further needed assurances for the general public.

What’s needed next are the human research studies that could move the clear potential for cannabis to help people heal cancer to an evidence-based reality. This, along with the research funding to make it happen.

Cannabis is already an effective antidote for cancer patients to reduce nausea and vomiting during chemo and radiation therapy. Many doctors recommend it to their patients. Even so, most people still consider cannabis as a medicine of last resort.

In November 2018 I met a lovely family when they hired me to find cannabis medicine to help their mother who was dealing with stage 4 colon cancer. She had been diagnosed in August and had surgery to remove the cancer from affected areas. Afterwards, she decided not to follow up with chemo and radiation.

By the time I got involved, which was more than two months later, mom had lost 40 pounds and was experiencing some serious symptoms. I heard from her daughter, a week after she started on the cannabis, that the family had already shifted their focus to Hospice care. This was really sad for me to hear.

The 80+ year U.S. law federally prohibiting cannabis as a Schedule I drug (of no medical value) has had a major impact on how we think about this plant; most marginalize it as real medicine. If to take advantage of virtually safe medicine without the many serious side effects of pharmaceuticals, we must stop considering cannabis as a last-ditch attempt.

I believe that the time for cancer patients to begin using cannabis as medicine is when they are first diagnosed, or even just simply when someone has an intuition to use it since cannabis is also effective as preventative medicine.

In some cases, cannabis actually has the synergistic effect of accelerating chemotherapy’s results. As far as I can tell, from my own anecdotal evidence, the sooner someone adds cannabis to their protocol the greater are their possibilities are for remission.

When we recognize and ditch the erroneous mindset instead of the truth about cannabis, we open to a world of honest, science-based education and medicinal use via an array of products and their multiple methods of delivery.

“Based on thousands of years of use, anecdotal reports, and extensive research, we know that cannabis is one of the safest medicines: it is impossible to consume enough to produce a fatal toxic effect in the body.” ~ Americans for Safe Access website

Disclaimer: The information and opinions shared here are for informational purposes only including but not limited to, text, graphics, images and other material, and are not intended as medical advice or instruction. Nothing mentioned is intended to be a substitute for professional medical advice, diagnosis or treatment.

One Response to “Cannabis: First-Line Not Last-Resort Medicine”